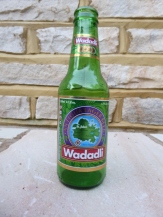 The third stop on our Caribbean cruise was Antigua. We docked at the capital, St John’s, in the north-west of the island, which has a deep harbour suitable for large cruise ships. Antigua was named by Columbus when he first visited the island in 1493, and means ‘ancient’ in Spanish, but is also known locally as Wadadli, which has a meaning similar to ‘our own’, and gives a delicious meaning to the name of the local beer! By 1674 its main crop was sugar, and by the 1770’s it had a slave population of over 37,000, and a non-slave population of 3,000! The slaves lived terrible lives, malnourished, cruelly mistreated, and even killed by their owners. The slave trade was abolished in 1807, and slaves freed by 1834. In 1981 Antigua and its sister island Barbuda, became an independent state within the Commonwealth of Nations. Antigua’s economy now relies on tourism, with luxury hotels along the coastline, and throughout the summer months cruise ships visit almost daily.

Antigua is surrounded by coral reefs, with a coast-line of about 54 miles, and (we were told) 365 sandy beaches, enough for one a day for a year! We had decided it was time to spend a morning on the beach, so we took a taxi ride to Fort James, a quiet and pleasant bay not far from St John’s. After paying an ‘umbrella rent’ we strewed our belongings under our huge, hexagonal wooden umbrella, and went for a dip. I expected the aqua-blue water to be warm, or at least warmish – it wasn’t! Instead it was a refreshing cold, not the gasping cold, we’re used to in the UK. There were large, long roller waves that almost swept us off our feet, we were later told this was quite unusual. We dried off quickly in the sun, and did a bit of beach-combing across the hot sand, finding shells and pieces of coral that had washed up on the beach. It was hot but not overwhelmingly so, and a bottle of Wadadli from the beach bar, went down very well! 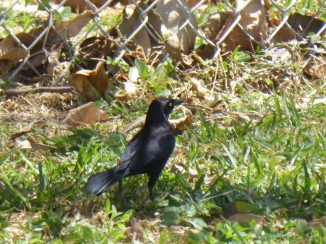 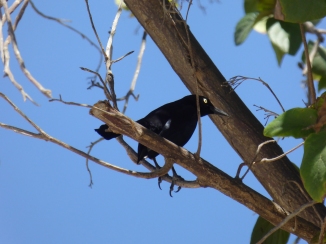 Palm trees grew along the beach, and there were scrubby trees with bright orange flowers, rather like azalea. A bird, with black plumage and bright yellow eyes hopped around in the sparse undergrowth at the edge of the beach, and then perched in the bushes; we later discovered it was a carib grackle. Fat pink doves cooed at us from the trees, and humming birds hovered around the flowers, iridescent blue and yellow, but they moved too fast to photograph. There were also huge, black frigate birds soaring high in the sky, and then swooping low over the sea. 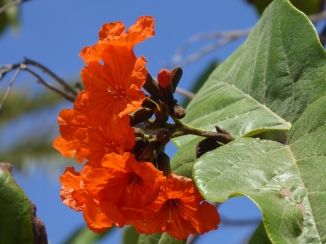 The beach at Fort James, Antigua was completely what I expected from a Caribbean island beach – pale dazzling sand, clear blue sky, aquamarine sea, and wall to wall sunshine! 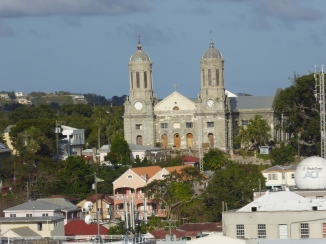 View of St John’s from our cabin